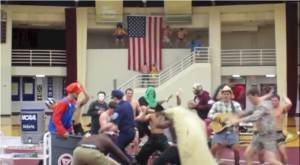 I’m sure everyone has seen a harlem shake video by now. I’m pretty sure I saw at least 500 different harlem shake videos. The harlem shake is a video of various people dancing in a funny way. The videos last about 30 seconds. The trend has went viral and has even involved the wrestling community. Today, I would like to show you the top five videos I like the most. I went through over a hundred videos. I hope you joy the wrestling videos.

Not a lot of characters, but there is still a lot going on during this video by Kent State Wrestling.

My daughter liked this wrestling video by Pioneer Wrestling because it has sponge bob. There is a lot of goofy stuff going on in this video.

Theres a dancing bannan, wolf, robin hood(?), and more. At least thirty different wrestlers in this video by Shawnee Wrestling.

This one is my favorite by Springfield College Wrestling. It has mario, a cop, a funny criminal and more. If you look in the back ground, there are several people doing funny things.

What do you think?

This is not my normal wrestling article. I wanted to do something to get the wrestling community to smile. I hope you enjoyed the videos. post a comment on facebook or at the end of this article to tell us which video you like the best. Thanks for reading and have a great day!