Looking for heavyweight wrestling tips? Do you want to be a better wrestler?

Most heavyweight wrestlers are different from other wrestlers.

That’s because most heavyweights are much bigger and less agile than the smaller weights.

I can say this because my son is a heavyweight wrestler.

I have watched quite a few really good heavyweight wrestlers. Each wrestler has their own style, but there are similarities between all heavyweights.

Let’s explore 9 strategies that will help our big guys and gals get better at wrestling heavyweight. 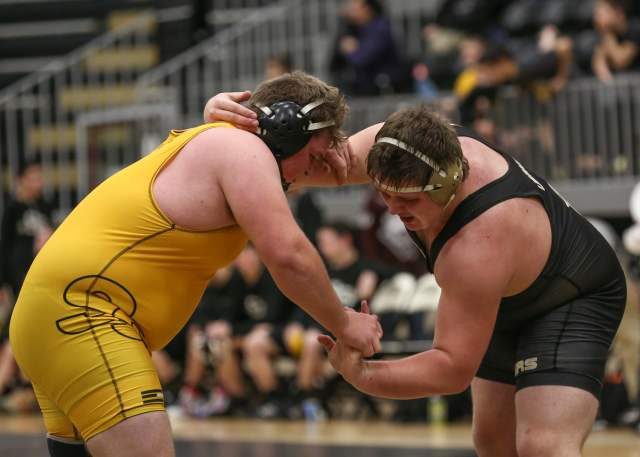 Be in Better Shape than Your Opponents

Heavyweight wrestlers are often out of shape and will run out of gas by the third period.

It’s hard to push an opponent that weighs 285 pounds. The great wrestlers are in better shape than their opponent.

If you are in better shape than your opponent, then there is a good chance you will win that match.

The national strength and conditioning association has some great heavyweight wrestling tips on conditioning and Strength Training for High School Wrestlers. 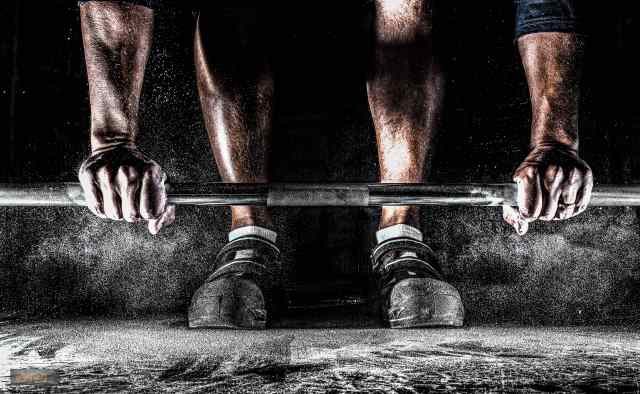 Strength is important, but it’s extra important for a heavyweight wrestler. If you take a shot on a big guy OR choose the bottom position, then you have a lot of weight on you.

Look at Kyle Snyder to see a perfect example of how spending extra time in the weight room can help a heavyweight. Kyle Snyder was considered to be a small heavyweight at the 2016 NCAA championships. He weighed just 222 pounds when he beat Nick Gwiazdowski in the finals.

Since then, he has gone on to win the gold at the 2016 Olympics. If you look at him, he looks like a beast. He pushes guys around that weigh 30-50 pounds more than him. Prior to wrestling heavyweight, he wrestled 197lbs in college. You can tell he has focused on getting stronger. He is a perfect example of how the weight room can help you in heavyweight wrestling.

Use the off-season to increase your strength and you will have a competitive advantage over other heavyweights. Spend the extra time in the weight room. It will be worth it.

Eating healthy foods will help you maintain a healthy weight.

The best high school and college heavyweight wrestlers are built like brick houses. They might not be as skinny as the lower weights, but the good heavyweights don’t have a lot of body fat. If you are a heavyweight that is carrying around unnecessary body fat, you will find that you will struggle against an athletic heavyweight.

I’m even willing to bet that some heavyweights would drop to a lower weight class if they focused on eating the right foods.

My son recently came to me and told me he wanted to start eating right. We made some small changes in his eating habits. Here are the changes I made:

While my son did not drop a weight class, we did see a noticeable improvement. Before he started eating healthy, he weighed 282lbs. One month after changing his eating habits, he lost 25 pounds. He told me that he feels like he can move faster. I noticed the difference at the junior duals. He was wrestling some studs. He surprised me by how well he was moving on the mat.

If you want to give yourself a competitive advantage on the mat, you should make sure that you are eating healthy foods and drinking plenty of water. You will notice you can move faster than a lot of other heavyweight wrestlers.

If your wrestling heavyweight, you need to learn takedowns.

Too many heavyweights stall from the neutral position. They do what I call the heavyweight dance. They look like bulls pushing each other around. I believe this is because a lot of coaches don’t force their heavyweight wrestlers to work on takedowns.

Your best heavyweight wrestling moves should be takedowns.

Every heavyweight should learn five takedowns that he can use against every opponent. If you can take any opponent down, you can win the match.

Every wrestler is different so a takedown that works for one wrestler may not work for another wrestler.

I would recommend that every heavyweight learns a single leg, double leg, a pass by, a knee pick, and a foot sweep.

Notice I did not mention a throw? A throw is a good weapon when wrestling heavyweight, but a throw is not a go to move. A good takedown has less risk with a better chance of scoring.

Check out our list of the best wrestling shoes. Good shoes give you a better grip when your shooting. You don’t want your foot to slip when shooting on a heavyweight wrestler.

What do I mean by circling? You will hear a ref say “Center” or “Action” during a match.

The referee is saying this because he wants the wrestlers to move to the center of the mat and wrestle aggressively.

If a heavyweight will learn to circle, he will avoid the stalling calls and will create an angle so that he can attack.

Also, it is harder for a heavyweight wrestler to attack if you are circling and looking for an attack yourself.

A lot of heavyweight matches will come down to one point. It’s crucial that a heavyweight learns to get an escape against any opponent. An escape could be the difference between winning or losing a match.

Some good escapes for heavyweights are a tripod stand up, a quarter stand up, tripod to a gramby, or a standing switch.

All of these moves need strength. Remember my previous section on spending time in the weight room?

To be a good heavyweight wrestler, you need to learn to chain wrestle. Chain wrestling is putting multiple moves together to constantly be on the attack.

Most heavyweights will try one move and then get stuck because they don’t know what to do next.

When you’re practicing, start drilling multiple moves. It takes some time to perfect chain wrestling, but it’s worth it. Chain wrestling will help you become a great heavyweight.

Learn to Ride Anyone

Learning to ride and break down any opponent is just as valuable as a great escape for a heavyweight. If a heavyweight can learn to ride an opponent, then his opponent has less chance to score and you have a better chance of pinning your opponent.

One of the most important aspects of the top position is to learn to break an opponent down. You need to know how to counter any move the opponent executes from the bottom. Some great breakdown moves are a spiral ride, ankle to tight waist, or drop to a single. If you drop to a single make sure you do not hang on to your opponents leg. You will be called for stalling.

If you want to get better at wrestling heavyweight, then become a student of the sport.

There are tons of videos on great heavyweights like Steve Mocco, Bruce Baumgartner, Cole Konrad, and Kerry McCoy.

Study the great wrestlers to learn how to be a great heavy weight. A lot of times, just watching an old college match will help you learn things you hadn’t thought about before.

Here are a few great resources that can help a heavyweight wrestler.

if you go to YouTube and type in wrestling heavyweight moves, you will find a lot of great tips that will help you become a better wrestler. My son will use youtube to do a refresher on moves that he is already using.

Attend a Camp – If you’re serious about becoming a better heavyweight wrestler, then you should consider attending a camp. Edinboro and Michigan have camps dedicated to the big guys.

Another great way to improve as a heavyweight is to watch instructional wrestling DVDs. While getting great coaching and workout partners is the best way to get better, You can learn a lot from wrestling DVDs.

Here’s are a list of our favorite heavyweight DVDs: 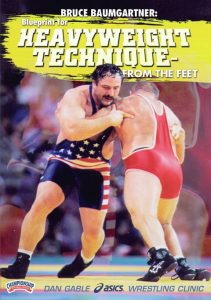 Bruce Baumgartner demonstrates how to be a dominant wrestler from your feet. We bought this video and refer to it all the time. It covers a broad range of heavyweight techniques. The video is 59 minutes long and was produced in 2007.

You can read our full review if you would like to get our unbiased opinion of this video. 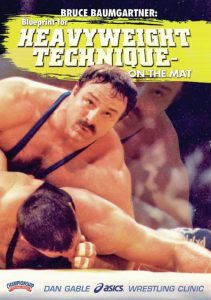 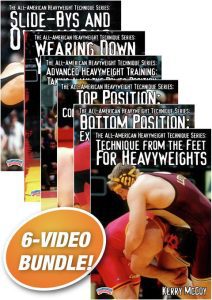 Kerry McCoy is former All-American and a two-time Olympic wrestler. That is just a few of this accomplishments. He is also the current Maryland head coach. From a heavyweight perspective, he knows his stuff. If you are looking for a video bundle to add to your library, this is a great choice.What I really like about his videos is that he goes into great detail. You can watch these videos a hundred time and still glean new heavyweight techniques. While he has great tecniques, I would recommend these for heavyweights that are in good shape.

What I really like about his videos is that he goes into great detail. You can watch these videos a hundred times and still glean new heavyweight techniques. I would recommend these videos for heavyweights that are in good shape.

4. Heavyweight Fundamentals: Wearing Down Your Opponent 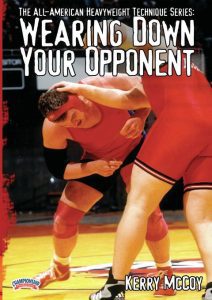 Big guys get tired! This is a great video for heavyweights that like to work the head and body. Kerry focuses on getting into a good position from several tie-ups. 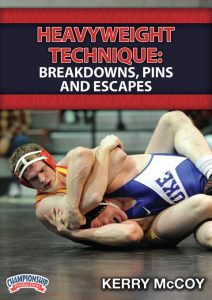 If you are looking to improve your bottom and top position, this is a great video.He shows some really good techniques for a heavyweight to work for a pin from the top and how to score points from the bottom. This DVD is a must for heavyweights and heavyweight coaches alike

I hope you enjoyed the article about heavyweight wrestling.

I am a fan of the big guys and I think that there should be more time and effort into developing great heavy weight wrestlers.

Do you have some feedback? We would love to hear from you. Post a comment and let us know what you think.

You can support our work by simply reading our articles and using our affiliate links to buy products. If you buy something from a link we have on our site, we make a small commission at no extra cost to you. We use affiliate links to keep the site free and help pay the bills.

You can click here to learn more about what we do.

We are not a typical review site that creates websites solely to sell products. We have been involved with wrestling for the last decade. we are committed to providing value to the wrestling community.

If you make a purchase through one of our links, we would like to say Thank You for your support.