What makes great wrestlers so good they are considered elite? I recently asked the wrestling community what are the characteristics of the best wrestlers. They listed Heart, Pride, Dedication, Sacrifice, Believing, Humility, Work Ethic, Desire, Commitment, Courage, and Mental Toughness. Let’s take a look at what makes a great wrestler.

How to be a Good Wrestler 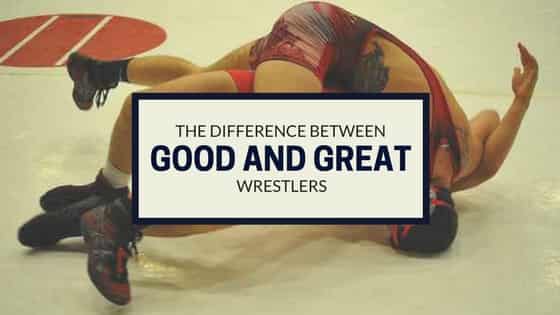 How to be a good wrestler? Photo Credit: Chris Hunkeler

Will work ethic help you learn how to get better at wrestling? A great wrestler has a better work ethic than his opponents. It’s not the wrestling headgear or the kind of shoes they wear. Great wrestlers are practicing and correcting bad wrestling habits when their opponents are watching television. They are doing strength training when everyone else is relaxing. An elite wrestler makes himself better by constantly learning and mastering new moves.

The great wrestlers are always training to become a better wrestler. If you talk to most elite wrestlers, you will discover that almost all of them wrestle during the summer time. Some will work on chain wrestling at practice and maybe attend a couple of freestyle tournaments and others will have a complete season where they attend multiple tournaments. Other wrestlers may not attend any tournaments but may attend a summer wrestling camp. The common theme here is that every serious wrestler is striving to get better at wrestling. Have you ever seen a state champion that didn’t look chiseled? You will notice that every serious wrestler spends the summer in the weight room.

Be consistent if you want to know how to get better at wrestling. Great wrestlers wrestle the same way from the time the whistle blows to the very end of the match. They are aggressive and looking to take advantage of any mistake that their opponent makes. That is why a great wrestler is hard to beat. They never let up. Consistency is key to getting better at wrestling. They are consistent in their wrestling diet, training regimen, and continuing to learn and improve. Champions are continually pushing themselves and learning how to become a better wrestler.

Never Stop Pushing – This book is an autobiography about Rulon Gardner. Rulon won the Greco-Roman gold medal at the 2000 summer Olympics. He talks about his upbringing, overcoming learning disabilities, and struggles in school that helped him win the gold medal. Want to learn how to get better at wrestling? Read this book. In my mind, Rulon is a great example of a wrestler that worked his butt off and achieved arguably the greatest upset in individual sports history when he defeated the Russian Alexander Karelin.

Oklahoma Shooter The Dan Hodge Story – When my son was a little league wrestler, he was always amazed when he would watch Danny crush an apple with one hand at Tulsa Nationals. Dan is renowned for his wrestling career, but he also is also a 3-time golden glove national champion. When I think about great wrestlers, Danny comes to mind.

A Wrestling Life: The Inspiring Stories of Dan Gable – You cannot mention great wrestlers without talking about Dan Gable. Dan Gable is a legendary wrestler who overcame numerous obstacles to having an incredible career in as a wrestler and as a coach. The book about Dan will provide inspiration to wrestlers everywhere.

I hope I have inspired you to get better at wrestling. I see so many above average wrestlers, who never move to the next level. I think it’s a disappointment to see a good wrestler who doesn’t have the mindset of a champion. If you are a wrestler, coach, parent, fan, etc…, we should all be focused on growing the sport. We should encourage our wrestlers to achieve greatness… to be a great wrestler. I hope you enjoyed the article. In my opinion, wrestling is the best sport that anyone can be involved in. My goal is to promote and grow this wonderful sport. Thanks for reading and keep working hard!