The key to winning matches is to learn chain wrestling.

Have you ever watched wrestlers try the same move over and over again… only to have that move defended by his opponent?

What is Chain Wrestling

What exactly is chain wrestling?

I think a lot of wrestlers and coaches may have heard the term, but don’t truly understand the concept. John Smith, the head coach at Oklahoma State wrestling is one of the key innovators of chain wrestling. 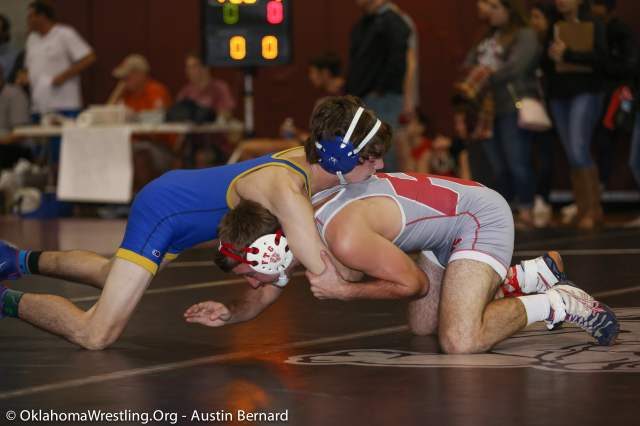 According to John Smith, he says that Chain wrestling gives your wrestlers the ability to string together a combination of moves once they get stopped that will lead to points.

I tend to compare chain wrestling to a chess match. A good chess player will think numerous moves in advance to counter his opponent. Chain wrestling is applying that same concept to the sport of wrestling. This means you have at least one move to counter your opponents defense.

Here is a sample of the video I mentioned:

It gives you some ideas of what a chain wrestler would focus on in practice.

Chain Wrestling is a Mentality

What do I mean by mentality? This means that a wrestler drills every day until he/she starts to string multiple moves together without having to think about it.

A wrestler that learns to successfully chain wrestle becomes very difficult to defend. Chain wrestling does not happen over night. It takes time and commitment to this style of wrestling, but chain wrestling will make you a better wrestler in the long run.

How to Become a Chain Wrestler

Want to learn how to chain wrestle?

The short answer it to drill chain wrestling until it becomes second nature.

Chain wrestling can be used by the smaller guys as well as the heavyweight wrestlers.

Put yourself in different situations where a move is defended and you work the counter. In fact, you should start drilling at least three moves deep. You should do this from the neutral, top, and bottom position.

Although a wrestler can do this on his/her own, I think it is up to the coach to teach all of his wrestlers to think this way. I think that a great wrestling coach knows his wrestlers and teaches them to wrestle this way every single day. That means at every practice, warm-ups, and during every wrestling match.

Another way to improve is to watch wrestling DVD’s that teach chain wrestling.

In doing research for this article, I came across some great resources that will help you with put multiple moves together. Hopefully, the links below will give you some good ideas on how to become a great wrestler.

Here is a great video that shows how to drill chain wrestling from an under hook series. This video was created by Nick Lang, who is the high school wrestling coach for Snow Canyon High School in St. George, Utah. I like this video because he covers several “What if” situations.

Here are numerous videos on chain wrestling drills to make you a better wrestler.

John Smith’s Formula to Stay Offensive. – This is one of the best videos on stringing multiple moves together. He covers chain wrestling from the neutral, top, and bottom position. I like the fact that he focuses on staying on the offense even though you’ve been stopped. This video was created by championship productions. You can also buy this video from Amazon.

The Wrestling Drills Bonus Pack – These drills can easily be implemented into a practice routine and will help create the muscle memory necessary to become a chain wrestler. This is a series of videos by some great coaches such as Dennis Hall, Tom Ryan, Dan Gable, and Steve Garland.

AAU Wrestling Skills Series with Eric Guerrero – Coach Guerrero also gives you every imaginable scenario encountered when performing takedowns and how you can finish. These drills will make you the ultimate chain wrestler! You’ll see how to set up your takedowns by Chaining your setups to stay one step ahead of your opponent.

Next Generation Wrestling Drills – This is a video by Mark Perry that demonstrates how to chain wrestle from one offensive position to another. He covers several chain wrestling drills from the neutral, top and bottom position.

Mark Perry Next Generation Drills 2-Pack – Coach Perry shares examples of how offensive attacks in practice (not just in ideal drilling situations) create a chain wrestler who can use multiple options to score. For example, if a wrestler fakes, then goes to one attack that’s defended, he can change direction and go to a different attack.

Scoring from the Bottom: Second Moves and Chain Wrestling – This is a chain wrestling video by US Olympian Ken Chertow. You will learn a variety of drills that will develop chain wrestling skills and maximize multiple scoring opportunities.

Shadow Wrestling by Ken Chertow – Ken Chertow has a great article about shadow wrestling. He talks about how this style of wrestling was part of his training regimen and how chain wrestling is critical to a wrestler’s success. He list’s several drills that you can use. In addition, he puts on numerous wrestling camps.

Ken Chertow’s Wrestling on the Mat 3-Pack – Here is a best-selling video series by Ken Chertow. He covers several drills to consistently apply chain wrestling to takedowns, pinning techniques and scoring from the top and bottom position.

Drills, Drills and More Drills – This video is by Steve Garland, University of Virginia Head Coach. He features 20 drills to become a better chain wrestler. Learn how to improve your chain wrestling by using your ability to scramble from tough situations.

Joe LeBlanc’s Wrestle to Dominate 3-Pack – In this video series, you will learn how to become chain wrestlers from the bottom. Coach LeBlanc starts with simple stand-up drills and moves to a chain wrestling drill that works on putting multiple moves together and develop muscle memory.

Championship Productions has 27 videos on chain wrestling drills. Click Here to view all of the videos available.

Daryl Weber has a website called attackstylewrestling.com. He covers numerous chain wrestling scenarios. He has also created his own instructional videos. It’s a great site with a lot of content.

Chain Drilling and Grind Matches – This is an article that was written by Steve Kimpel. He talks about chain drilling will help a wrestlers conditioning as well as teach a wrestler to continually battle for position. It’s a good read.

I hope you enjoyed the article about chain wrestling. I truly believe that elite wrestlers incorporate multiple moves into their practices and matches. Do you have a story or feedback you would like to share? We would love to hear from you.

Thanks to Austin from Owrestle.com for the use of his photos. His photos are amazing and if you’re looking for action shots or posters, he is one of the best wrestling photographers you will find. He photographs little league, school, and even college events.

We put dozens (if not hundreds) of hours man hours into each article. We love what we do and hope you do too.

Our goal is to provide value to the wrestling community.

You can support our work by simply reading our articles and using our affiliate links to buy products. If you buy something from a link we have on our site, we make a small commission at no extra cost to you.

Here is an explanation of what we do and how to support our continued work.