what is the correct age to be cutting weight for wrestling? Wrestling is one of the most demanding sports you can find. One of the aspects of this sport is that it is sometimes necessary to drop a few pounds so you can wrestle a lower weight class.

The same applies to many other sports where there are weight classes, such as boxing, judo, and mixed martial arts fighting. When it comes to weight cutting, most people think about wrestling when they hear those words. 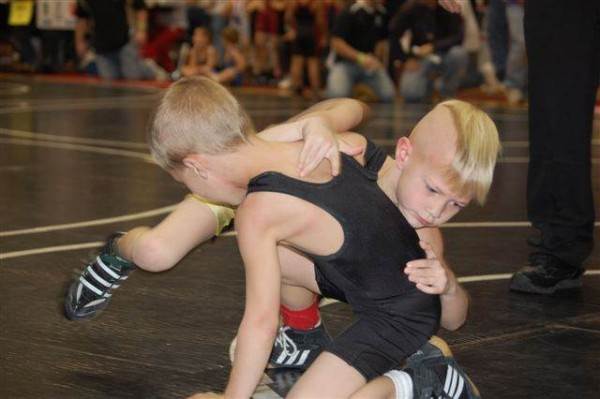 What is Cutting Weight?

Cutting weight is the act of reducing a person’s body weight quickly. The objective is to wrestle a certain weight class for a tournament or a dual. There are safe and unsafe ways to cut weight.

I’m not going to cover how to cut weight for wrestling. I can tell you that it is usually done by reducing calorie intake, working hard in practice, and restricting water intake.

This is for short-term weight loss. This means a wrestler will lose weight and gain it back right after a weigh-in.

This is a topic that a lot of people are passionate about. Some parents and kids are fanatic about dieting to wrestle. Others think no wrestler should restrict food and water to compete. In my opinion, it really depends on the kid.

I found a great article by Steve Fraser from Kansas USA wrestling. He talks about his experience with losing 20 pounds during his sophomore year in high school. In the article, he said that he was an average wrestler when he pulled from 165lbs to wrestle at 145lbs.

I’ve seen kids as young as eight years old cut weight. If your wrestler is in elementary, then there is no long term advantage to going without food or water. If you and your kid have to constantly watch the scale in little league, there is a good chance your kid is going to burnout.

As a general rule, I’m not a big fan of anyone under the age of twelve losing more than a pound or two. I realize that you want to teach your son how to be a good wrestler. In my opinion, you should focus technique instead of how heavy your kid is.

When a child reaches junior high, the child should make the decision of how much weight to lose. If a wrestler is going to cut, then he/she should learn how to do it the correct way.

In my opinion, there is one time when a youth wrestler should drop weight. A lot of kids involved with heavyweight wrestling tend to be over weight

If you have a child that is 5-12 years old and they are obviously over weight (BMI over 27), then as a parent you should definitely have your child lose weight. I would do this by changing your families eating habits.

My guess is that if your child is overweight, that he/she is not eating a healthy diet. I would NOT recommend starving a kid to make weight.

I would be lying if I said there were no advantages to dropping weight to get to a lower class.

If the weight loss is done right, there are some definite size and strength advantages over a wrestler who does not cut weight. Have you ever noticed that a wrestler appears to be bigger than his opponent?

What I can say is that if a wrestler cuts weight at a very young age, he/she will most likely burn out and quit this sport before high school. Younger wrestlers would be better in the long run by focusing on chain wrestling and focusing improving their technique.

Also, any parent that is starving a kid, could be impacting the child’s growth.

In the end, this is a decision that the parents and kids have to make. The goal should be to keep your kid excited about wrestling. I just hope I gave you something to think about before making that decision.

I hope you enjoyed the article about when you wrestlers should do a weight cut. Do you have a story to share?

We would love to hear from you. Post a comment at the end of the article and tell us what you think.