The half nelson is a common pinning move in youth and high school wrestling. A lot of younger and inexperience wrestlers have difficulty in defending this move. There are some great wrestlers at the high school and college level that have great half nelsons, but most half nelsons lack the proper technique to turn an experienced wrestler to their back. Let’s discuss how to defend a half nelson. 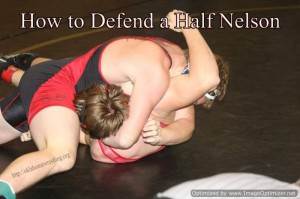 What is a Half Nelson

This is a great move when an opponent is not moving from the bottom position. Here is a video by PlaySportsTV Wrestling that demonstrates a half nelson.

The Half Nelson is easily Defended

First let me say this… If a wrestler is moving off the bottom, it is almost impossible for a wrestler to get put into a half nelson. That is what I prefer any wrestler to do. They should focus on stand ups and reversals.

There are times you will encounter a wrestler that is very good at riding an opponent. This is when you are most likely to have a half nelson thrown on you. Here are some general tips on how to defend a half nelson.

What you Should Do

What You Shouldn’t Do

Here is a video by Carl Adams on how to defend a half nelson. Carl Adams was a college wrestling coach for 41 years.

There is plenty of information on YouTube about how to defend the half nelson, but if you are looking for some great instructional wrestling videos, then take a look at Championship Productions. Ken Chertow has some videos that will help with bottom and top work.

Please note: Some of the links in this article are affiliate links. If you make a purchase, I will make a small commission at no additional cost to you. You can read here for full disclosure.

I hope you enjoyed the article on learning to defend a half nelson. As an active member of the wrestling community, my goal is to grow this wonderful sport.