Have you considered putting your child in freestyle wrestling? I can honestly say that until recently I didn’t know anything about Freestyle wrestling. That changed when my son went to Indianapolis to wrestle in the national schoolboy duals three years ago.

I have since learned a lot about both styles of wrestling. I try to watch the Olympic style of wrestling as much as possible. Both Greco and Freestyle wrestling is very dynamic and exciting. Each one has its differences. 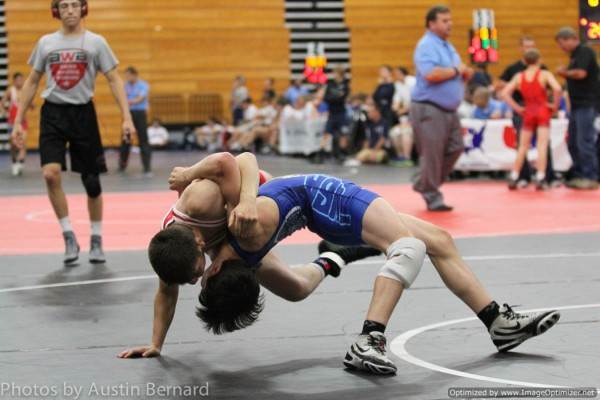 What is Greco and Freestyle Wrestling?

You may be asking “what is freestyle wrestling”? Here is a summary of each style of wrestling.

Greco – The modern day version of Greco originated in the first modern Olympic Games of 1896. In Greco wrestling, you cannot use your legs in any way to attack an opponent. Any use of your legs will stop action and put you back on your feet. It is wrestling based primarily on leverage and throws.

What Makes Freestyle Wrestling so Great?

It’s a great article. I won’t repeat everything he said, but I will provide a summary. Zeke states that wrestling is fun and that freestyle increases your chances of earning a college wrestling scholarship dramatically.

This style of wrestling promotes learning, is fast paced, and is exciting to watch. Since freestyle is mostly wrestled from your feet, you learn to score and get better at defense on your feet.

I read an article on “Making the Transition from Folkstyle to Freestyle“. The article talks about how the best wrestlers, such as Cael Sanderson, Jordan Burroughs, Jake Varner, etc… all wrestled freestyle. it also talks about how freestyle wrestlers will learn the best fundamentals for folkstyle.

If you can take your opponent down at will, you will almost always win the match. Freestyle wrestling is very fluid and you don’t spend much time on bottom. I’m a believer that the more time you spend on your feet the better at take downs you will get.

In collegiate style wrestling, there is a lot of pressure to win. This is especially true at the high school and college level. Freestyle/Greco is a more relaxed environment. The freestyle wrestling season is less focused on winning and more about having fun… about developing as a wrestler.

Don’t get me wrong. Kids who wrestle freestyle/Greco are ultra competitive. I had written a previous article called “Want to be a State Champ? Wrestle Greco and Freestyle“. The difference is that a wrestler will take more chances during the freestyle season and isn’t afraid to lose. They don’t wrestle to not lose.

Daryl Weber from attackstylewrestling.com has a great article called “Why Wrestle Freestyle & Greco-Roman“. He talks about how striving to be successful in Freestyle & Greco will solidify the techniques to be a state champion.

Max Askren also wrote a similar article called “Freestyle, Why Not?“. He brings up some of the same points about low stress, how freestyle promotes attributes that greatly help folk-style wrestling. It’s a great read.

Freestyle/Greco is all about exposing your opponents back to the mat. In my opinion, FS & GR is easier to score points and harder to defend. Position, stance, and hand fighting are extremely important and will translate well into collegiate style wrestling.

Improve Chances at a Scholarship

Want to be the best? If you want to be the best, you need to wrestle the best kids in the nation. The serious wrestlers are going to local, state, and national competitions. Freestyle wrestlers are serious about the sport and this is where you find the best competition. Don’t believe me? Go to either flowrestling or intermat.com. Identify the top wrestlers in any weight class. Google their name and I can almost guarantee you will see past matches where they wrestled at Fargo.

Every year we attend some of the toughest tournaments we can find. One of those tournaments is Tulsa Nationals. When you look at kids from states like California, they always have some very good wrestlers in the finals. I’ve talked to a lot of their parents and almost all of them learned freestyle first and almost every kid looked like he was putting on a take down clinic.

What Are Your Thoughts?

I hope you enjoyed the article and give some thought to signing your child up for freestyle wrestling. Do you have some feedback? We would love to hear from you. Post a comment and let us know what you think.

Enjoy the article? Share it with your wrestling community.