Have you ever heard the phrase “summer wrestling makes winter champions”? There is a lot of truth to that. I have seen many wrestlers who wrestled in Greco and freestyle in the spring and noticed huge improvements when the folkstyle season started.

Learn to be a Better Wrestler

After the high school championships completed in Oklahoma, I read some interesting stats on Oklahoma USA Wrestling. The author is Matthew Stevens and he stated that 45 out of 56 Oklahoma State champs wrestled for team Oklahoma. He also stated that over 50% of medal placers wrestled at Fargo last summer.

Typically fewer wrestlers participated in Greco and freestyle wrestling. A lot of kids go into soccer and baseball or do nothing during the spring. The fewer amount of wrestlers means for more mat time.

The spring wrestling season is typically much more relaxed. Wrestlers are encouraged to take more risks and are not as focused on the winning/losing aspect of wrestling. 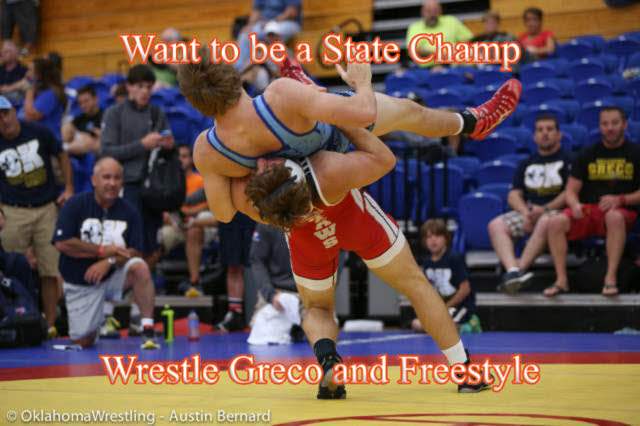 Since you cannot use the legs as an attack in Greco-Roman, it really teaches wrestlers to battle on their feet.

The leverage and positioning that you learn in Greco will directly translate into folkstyle. This is because you learn how to control the upper body. Learning to use the upper body will teach you score more points from your feet.

Since Greco is all about position, you learn how to hand fight. The art of hand fighting is a crucial skill to have in all three styles. If you watch elite wrestlers, they will use hand fighting to wear down their opponents and setup for numerous takedowns from a tie. While you can learn hand fighting in other styles, I think summer Greco wrestling does a great job of helping you learn this skill.

You also learn to be more effective with your ties like the “Russian Tie”, Over Hooks and Under Hooks. Since you cannot attack the legs, you learn to use ties and head control to score points. You probably won’t be throwing machine like a Bo Nickal, but learning to master control ties will teach you multiple ways to setup a takedown.

In freestyle, it is much easier to score (in my opinion). The rules are written in such a way that offensive wrestlers are rewarded for their effort. The action in freestyle is quick and furious.

I believe this style teaches wrestlers to take risks, learn angles, and how to quickly attack. I think it also improves your defense. If you are wrestling opponents that are great on offense, you have to work even harder to counter their moves.

Work toward the Center

Summer wrestling will teach you to work toward the center.

Attack Your Opponent at Mat Edge

Along with circling towards the center, both styles teach you to attack your opponent at the edge of the mat. It makes it harder for your opponent to counter your attack and reward vs risk is much higher. The reward that you will score is high and the risk of a counter is low.

If you are wrestling Greco and Freestyle, then you know the benefits. If you’re not, then hopefully I’ve given you some reasons to start wrestling in the spring.

If you have any comments or feedback, we would love to hear from you. Post a comment at the end of this article or on our Facebook page. I hope you enjoyed the article. Thanks for reading and have a great day!