Wrestling needs a makeover! Let’s face it. Wrestling is the greatest sport on the planet, but the average person will not attend a wrestling event. This sport builds so many good characters, such a work ethic, perseverance, integrity, etc… but most people know very little about one of the oldest sports on the planet. 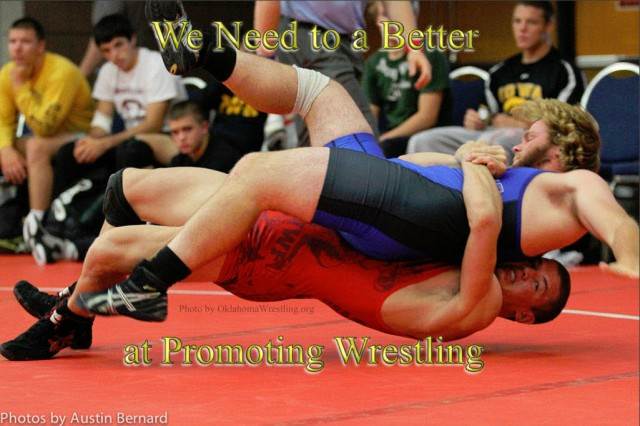 Average Person does not Understand Freestyle and Greco

If you take an average person off the streets and have them watch a freestyle or a Greco wrestling match, they will be able to tell you that two people are wrestling. That person cannot tell you how points are scored, how the periods are done, or rules of the match.

What’s worse is most wrestling parents cannot tell you much about Olympic style wrestling. Their kids do their folkstyle wrestling season and then they are done.

In my opinion, this is where we have failed in the sport of wrestling. We should make it a goal to teach everyone we can about how Olympic style wrestling works. This starts with our youth and with their parents.

The best way to teach people about Greco and freestyle is to incorporate those styles into the normal wrestling season. Make it like a month or two months long. Have our youth coaches teach the kids and the parents. Then you can have a regular season in the summer like you normally do. The difference is that the entire wrestling community will have a good understanding of Olympic wrestling. You might even get some of those kids that would otherwise play baseball.

Suggestions on Growing the Sport

I think there is a ton of things we can do to better promote this sport. If we look at hugely popular sports, like soccer, baseball, and football, we can get our cues from them. Here are few suggestions on growing wrestling.

Get More Advertising and Wrestling Events on TV – I’m not sure how. I’ll leave that to our leadership. We should be putting out promotional videos as well as getting wrestling events on prime tv. If you look at college football as an example, it is all over the television and young kids grow up dreaming to play college and professional football.

Partner with MMA Fighting – One sport that has grown over the years is MMA fighting. They have figured out how to make it popular and it incorporates wrestling. I think this industry could be an ally to our sport.

We need Ambassadors – We need guys like Jordan Burroughs,Cael Sanderson, Dan Gable, Jake Varner, and Ben Askren to spend as much time in the public eyes as much as possible. They should be going to schools, churches, little league clubs, etc…

If we don’t make changes, wrestling is doomed

We have a tough road ahead of us. As wrestlers, we are used to persevering through adversity and overcoming challenges. If we don’t make changes now, I fear we will be facing a slow demise of wrestling. I love this sport and that would be truly sad for me to see this sport go away.

I hope you enjoyed the article. As a member of the wrestling community, my main purpose of this blog is to grow and promote this wonderful sport. Do you have any feedback? We would love to hear from you. Post a comment or a question and we will respond as soon as possible. You can also get in touch with us on our facebook page. Thanks for reading and have a great day! the photo was taken by Austin Bernard at OklahomaWrestling.org