Every wrestler who steps on the mat wants to win.

The reality is that even great wrestlers will lose occasionally. I see elite wrestlers lose all the time. For example, take the first bedlam dual of 2015-16. Kaid Brock had his redshirt removed and pinned Cody Brewer who was the defending national champion. Kaid Brock is a stud, but I’m sure that Cody didn’t expect to get pinned.

Wrestlers who are serious about the sport hate losing. They think about that loss. They don’t sleep because it tears into the core of who a wrestler is.

Losing sucks, but successful wrestlers need to embrace the loss. I’m not saying you should be OK with losing, but you should improve as a wrestler. The most important thing you need to do is learn from your loss. Here are some important lessons that can be learned from losing. 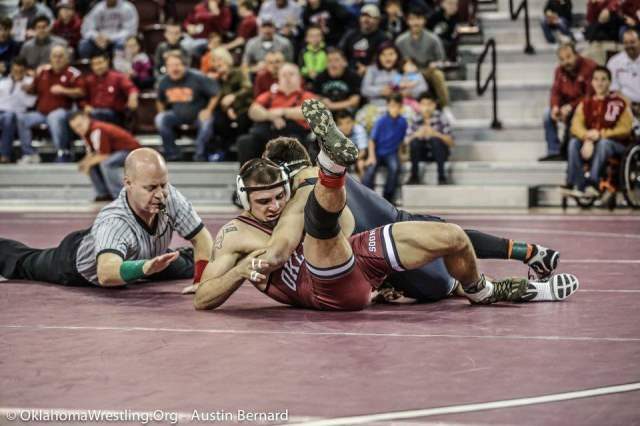 Losing provides a reality check. You came into a match thinking you were a bad dude and you lost a match that you didn’t expect to lose. You know that winning matches requires confidence and a wrestling mindset. Confidence is a good thing in wrestling but is it possible you were too confident. Did you come in with a rock star complex?

It’s time for a reality check. You need to realize that winning is never guaranteed. You have to come into every match with a warrior’s attitude. Don’t lose your confidence, but realize that overconfidence can cost you a match. Some of the best athletes I’ve ever watched did their best when they have a chip on their shoulder.

Learn from Your Loss

After you have had a good dose of reality, you need to take a step back and learn from your loss. Becoming a champion is more than lip service. You need to evaluate why you lost and figure out what you need to do so that you won’t make the same mistake twice.

Everyone will lose in life. That’s a given. Successful people will learn from their mistakes and won’t repeat them. Determine why you lost. Use that loss to make you a better wrestler.

Ok, so you lost a match. They sky is not falling. You still have goals and objectives to achieve. After you have evaluated why you lost, you need to re-focus on what you want to achieve. Stay focused on the goals you have set for yourself as a wrestler.

One of the worst things a wrestler can do is to underestimate your opponent.

I watched some heavyweight wrestlers this weekend. The less experienced wrestler beat a kid with more experience. It appeared the better wrestler came in over confident.

Treat every opponent with respect. Expect that they plan to beat you. Don’t underestimate the underdog. You know you train hard, so step on the mat ready to do battle.

Dust Your Self Off

He was not always successful. In his freshman year of wrestling, he went 16-13. However, he continued to work hard and went on to win 111 matches during the remainder of his high school career. Dust yourself off. Continue working hard to achieve your goals.

If you want to be a successful wrestler, you need to put in the work. There is no short cut. You have to train harder than your opponents and continue to learn. Success comes from failure.

The sweetest victories have come by persevering through your losses. This means you have to dig down deep and continue working.

While I was writing this article, I found several articles that I used as a reference. Here are some good reads on success, winning and perseverance. I hope you find them as useful as I did.

Three Essential Elements Of A Winning Mindset – Bruce Kasanoff has written about a winning mindset and how that mindset will always outperform other who aren’t improving. Growth + Grit =Lifelong success

Embrace Your Losses – Here is a great article about how the author hates losing. He hates losing so much that he dwells on it. He has learned to embrace his losses because they will make you stronger.

Wrestlers and Peak Performance – This an article by competitivedge.com. The author talks about the mental aspect of wrestling. He starts out the article by asking “Is Your Head Preventing You Wrestling Like a Champion?”. It definitely gives you something to think about.

I hope you enjoyed the article. No one likes to lose, but losing a match can make you a better wrestler. Do you have a story you would like to share? We would love to hear from you. Post a comment and let us know what you think.

Thanks to Austin Bernard for the use of his photo. He is one of the best wrestling photographers I have met. Check out his work at http://photographsports.zenfolio.com/